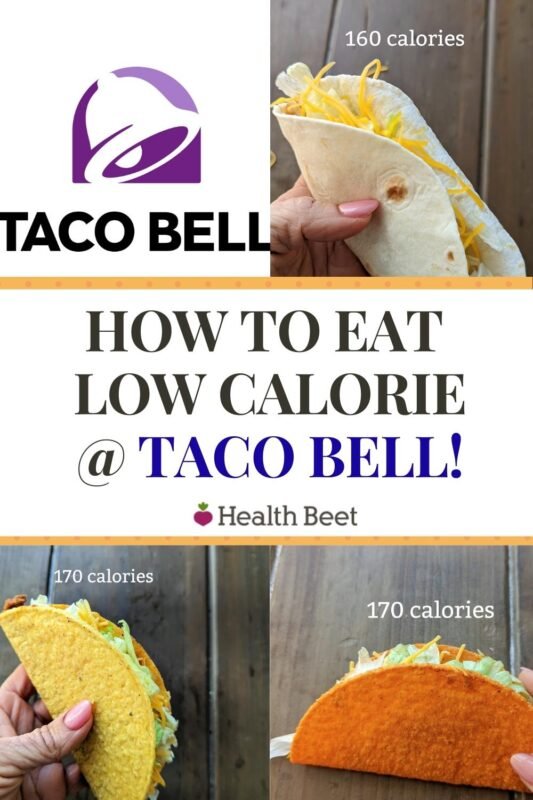 Stick to your dieting goals, even when you eat out! Here’s our best pics for Taco Bell

With nutrition facts readily available, you can find things on almost any menu that will fit into your diet. Yes, even at Taco Bell. I picked the top low calorie Taco Bell menu items to help you out!

If you are following a low calorie diet and feel like you aren’t able to eat out, think again!

When you don’t feel like you can go out to eat while dieting, it’s possible you’ll get even more discouraged. No one likes to feel “FMO”, or Fear of Missing Out.

We have all been there but it doesn’t have to be like that. Most places will accommodate your needs, including Taco Bell!

So many restaurants have great options if you are trying to count calories or be in a calorie deficit. Although eating out often will certainly make dieting more difficult, once a week isn’t going to be the end of your success story.

Taco Bell actually has several low calorie options. Not only that, but they have been working very hard to accommodate many different diets including vegan and gluten free.

Taco Bell is a large chain restaurant that can be found in most states. With that being said, sometimes it can be a great place to stop for a quick bite to eat while traveling or on the go.

The menu at Taco Bell is broken up into a variety of sections, some of which include,

Their website is actually pretty impressive, and has many great resources to help you find exactly what you are looking for.

One thing the Taco Bell website says is that if you want to decrease your calories and want an over all healthier meal order, “Fresco Style”. Fresco Style lowers the calories, by reducing high calorie sauces, cheeses and using a low calorie sour cream. Choosing this option can reduce calories by up to 25%!

The other major thing I learned about Taco bell is that generally chicken is the healthiest option unless choosing vegan.

The hardest thing about Taco Bell is everything has so much Sodium!!!

All of the meats add so much sodium, which isn’t necessary and definitely can be a turn off. If this is your only option for food and you need low sodium stick to the vegan options because they have the least amount of sodium.

The other thing to remember is that by adding vegetables like lettuce, tomatoes and onions will help you feel fuller without adding many calories. Most places will even add those without making your cost go up as well!

Here are a list of a variety of food that contained lower calories as well as lower sodium levels at Taco Bell!

The Soft Taco’s at Taco Bell are one of the lowest calorie foods you can get. It has pretty great macros and can be adjusted to fit your needs. Never hesitate to add some onions, tomatoes, olives and lettuce to your taco to make it a little bigger so you get fuller faster!

This and the Soft Taco’s are pretty similar. One thing I like about the Nacho Cheese Doritos Locos Taco is that it is lower in sodium but it does have a higher amount of fat.

The Bean Burrito, out of all the Burritos had the lowest amount of sodium as well as calories. The Burrito Supreme chicken and beef came in a close tie for second. The chicken has 20 less calories, more protein and less fats than the beef but more sodium.

If you are really wanting a Quesadilla from Taco Bell make sure you pay attention to the amount of Fats it contains. If you customize your order and go easy on the cheese you can take it from 25g of fat to 18g.

The Power Menu is a very unique area on the menu. To be honest, I wasn’t very impressed with it. In fact, many of the macros on the “Power Menu” were higher in fats, carbs and sodium if compared to other items on the menu with the same or less calories.

With all of that being said, I know that Taco Bell does have some great lower calorie foods. They also do a great job with accommodating to individual needs.

Don’t forget that you can take away higher calorie foods or add foods that are lower calories. Each of these will help you feel fuller faster and can help decrease the amount of calories consumed.

Now, share with me some of your favorite items at Taco Bell that you’ve been able to customize to accommodate your needs!

Paige Merritt is a Health Care and Wellness Professional with a Bachelors of Science in Human Nutrition with an Emphasis in Allied Health from Southern Utah University. She is a firm believer in Lifestyle changes and not just quick fixes or fad diets. She specializes in Gluten Free and Allergy Diets. Paige is a Mother, Wife, World Traveler and a Celiac.