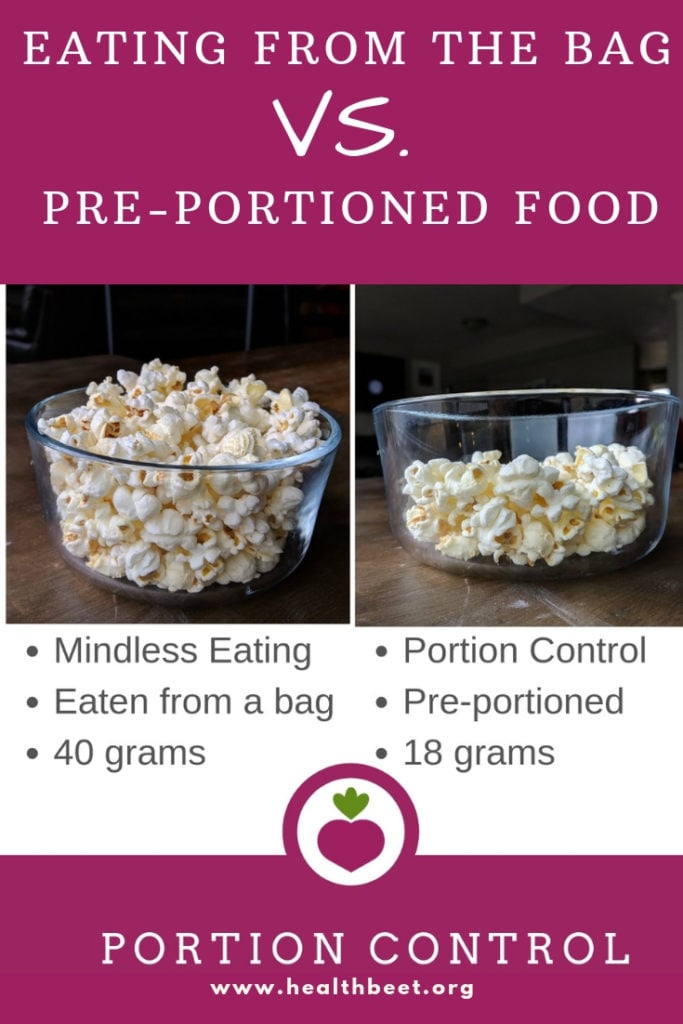 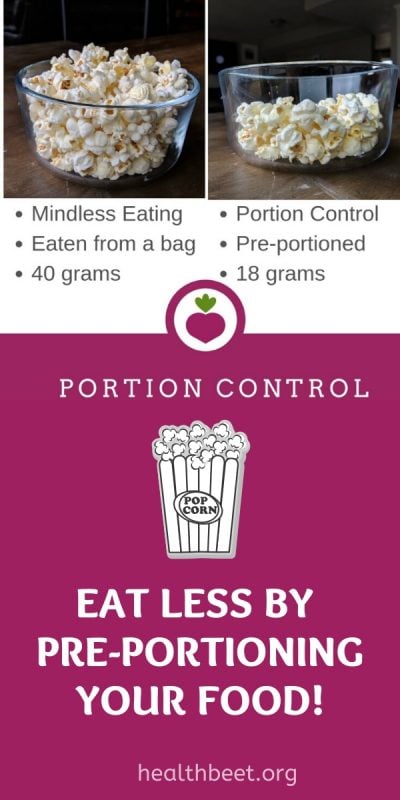 Eating from a bag vs. a pre-portioned serving yielded 100% + more food eaten. Mindful eating can help you practice portion control.

We all know how easy it is to overeat when you eat out of a bag, vs. when you pre-portion out your food. But, I was interested to see how much more my own family eats when they have a large bag of popcorn and no indications when to stop.

So, I do what any parent would do. I performed and unscientific, blind study on my own family. The results weren’t surprising, but they were interesting!

I bought a large bag of “Skinny Pop”, and some “single serving” bags of Skinny Pop. The single serving bags had 18 grams of popcorn in them, which became my control.

It’s rare that I purchase popcorn pre-popped. For one, I’m not a fan of snacking, but also, popping your own popcorn is much more affordable. Why people buy it pre-popped, I have no idea.

Because the premade popcorn is a rarity at my house, I knew they’d start to eat it right away. I weighed the bag, put it in the pantry, and sat waiting in suspense.

One child took the bag out, and sat on the couch with it while she watched Grey’s Anatomy. After awhile, she returned the popcorn to the pantry, where I stole it for a second weighing. She had consumed 40 grams of popcorn, mindlessly in front of the TV. This is more than 100% more popcorn than the single serving bags.

My second child came into the kitchen, literally no more than 5 minutes later. I knew my experiment was going to be over the first day of buying the popcorn!

He opened the pantry, saw the popcorn, and took it to the counter with him as he snacked and scrolled who knows what on his phone. (a mix of texting, instagram scrolling, and watching strangers play video games on Youtube I’m guessing.)

He could have eaten more, but we were headed out for the night and I made him put the bag away. I grabbed the bag and weighed it again. Another 40 grams consumed. Kind of odd that they both ate 40 grams, which could be an interesting point of discussion.

I would have carried out my blind test to the other two members of my family, but by the time I got back to the bag to weigh the popcorn again the next morning, it was gone. LOL Moral of the story. Don’t eat from the bag if you are trying to eat less food. Also, Skinny Pop is not exactly a filling food.

READ NEXT -> 7 FREE PORTION CONTROL HANDOUTS FOR YOUR FRIDGE!