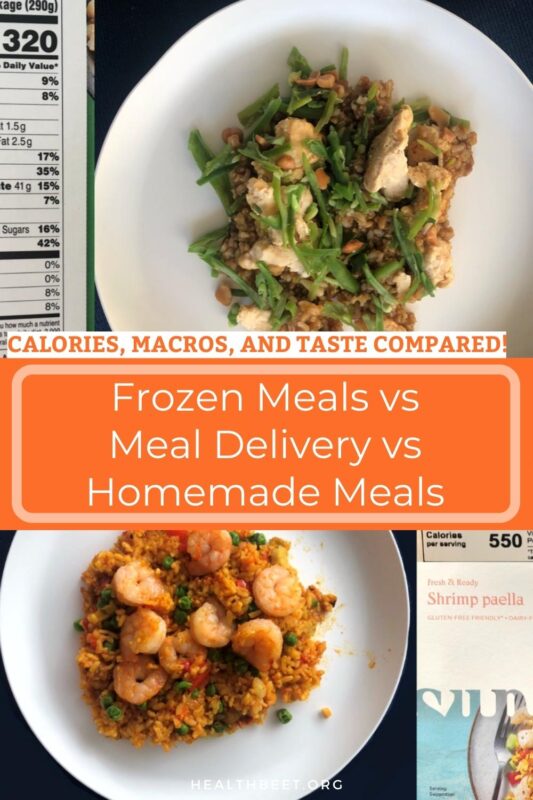 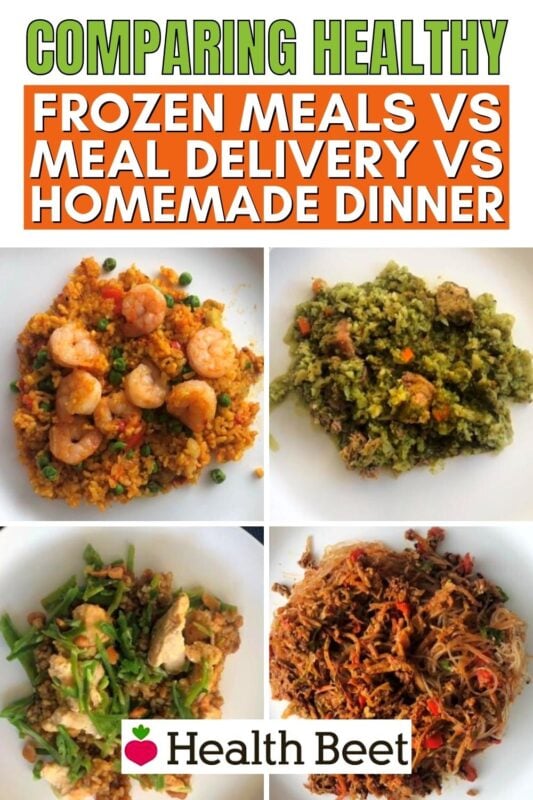 Meal delivery vs freezer meals vs homemade meals. How do they compare between macronutrients, calories and overall taste.

When it comes to balanced eating, our first thought might be, this is going to be a lot of work. From buying groceries, finding recipes and preparing the food, the time adds up.

Companies have tried to capitalize on this by making ready to eat products that just need to be microwaved and even meals shipped right to your door. But the question remains, how do they compare to homemade meals?

To see if these meals are worth it I tested out quite a few meals. There is a wide selection of frozen individual meals. I selected a variety of those that had vegetables and around 20 grams of protein and were between 350-600 calories.

I also wanted to see how the delivered meal plans compared. Because I was comparing individual ready to eat meals, I tried some of Sunbasket’s fresh and ready meals.

I like having the control of what goes into my food, from how much salt, the quality of ingredients etc. When it came to comparing these meals it was more than just the calories and macro breakdown.

I wanted to see how they tasted, what was the quality of ingredients, and ultimately if I would swap a homemade meal with one of these. I didn’t expect these to be a homemade meal, but hoped a few would get close.

I tried different brands and a variety of meals. I was surprised with the difference in quality and taste between the ones I tried. The biggest takeaway was the lack of vegetables. It might say it has vegetables, but I doubt there will be many. It’s mostly rice, or pasta. One of my favorites was the ones with rice and beans.

The quality of the meat was definitely different between the different meals. I won’t say it correlated exactly with the price of the meal or the catchy new brands. But I did like those meals more even though they cost $1-2 more per meal.

The meals ranged about the same in macronutrients except for fat. The two ‘lean’ meals had lower fat. Funny enough those were the ones I liked least. It felt like they used extra strong sauce, and in the two meals I tried were quite sweet with one even having 12g of added sugar.

Here is my review on the each frozen meal with my favorites first:

Love steak with beans and rice

Sunbasket is a meal delivery that has meal prep kits and ready to eat meals. They also let you pause your subscription, so you can order it just when you want them. They had a good variety of pre-made meals to pick from.

I liked the portion sizes of the meals. They were more filling than the frozen meals, which would make sense, as they were more calories. I like the average portion of protein in the meals. The meals also felt more like a homemade/restaurant dish compared to the frozen ones that were one mixture of the same thing, these the food was more separate, such as the chicken and cauliflower-potato mash, it was separated instead of all mixed together. It made it easier to have less sauce if you wanted.

Overall the meals had more calories and macros, but the ratio of one macro to another was not that much different then some of the frozen meals or the homemade meals. I felt like the average portion was larger than the frozen meals.

Here were my thoughts on the each meal with my favorites first:

The homemade meals were very simple, only had a few ingredients and overall were pretty filling. They were not as exciting as some of the Sunbasket meals when it comes to flavor, but over all a good basic meal.

The homemade meals were very simple, only had a few ingredients and overall were pretty filling. They were not as exciting as some of the Sunbasket meals when it comes to flavor, but over all a good basic meal.

There were frozen meals and Sunbasket meals I liked and some I didn’t care for. There is room for convenient meals when trying to eat balance and loose or maintain weight. There are a few things I look for in meals like these to see if they will be beneficial to my body and my goals. These questions can help you determine if the meal is right for you.

Having a few convenient meals like frozen ones or Sunbasket meals can help you eat a balanced meal when you have no desire to cook and would probably otherwise just eat the random bag of chips in your pantry. I wouldn’t suggest using them as the majority of your meals but they can be helpful to have on hand when you’re in a pinch and need an easy meal.

A native from northern California, Jacqueline enjoys playing sports and spending time outdoors. She is an aspiring dietitian, having received a bachelors in Dietetics from Brigham Young University and currently completing a dietetic internship. She loves learning ways to incorporate foods by trying new foods and testing recipes. She enjoys helping individuals expand their diet and develop a healthy relationship with food while reaching their goals.