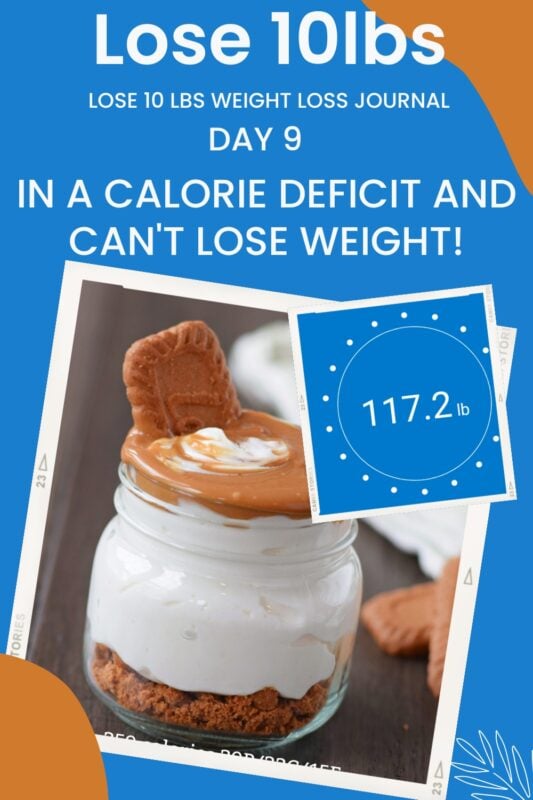 Day 9 of my weight loss journal, 1500 calories. Have you ever been frustrated because you’re in a calorie deficit, but not losing weight? That’s what today’s weigh in looks like, but here’s why I’m not worried. (See the other days in this weight loss journal here)

Yes you read that correctly! 117.2 lbs. I’m trying not to freak out. I’ve told so many people over the last two years that it takes awhile for me to start to see results, even when I can be 100% compliant to a calorie deficit.

I also tell people to not put any drama around what the scale says each day.

I also tell people this journey is not a linear progression.

But it still stings a little bit. I’m not going to lie. But, it also makes me glad that I weigh every day, and not just once a week. If I saw that number after not knowing that yesterday I was 115lbs, I’d be freaking out right now.

The bottom line is, there are so many reasons for the scale to fluctuate. And there could be reasons you truly aren’t losing weight in a calorie deficit. (*read this article, How long it takes to lose weight)

2 Reasons you aren’t losing weight in a deficit

1) You aren’t in a deficit and 2) you aren’t being patient enough.

So, from my personal experience, I will expand on those two MAIN reasons

2 – You aren’t being patient enough

I like to consider myself a “professional dieter”. Haha. I keep an excellent food log, and can be very meticulous about the food I weigh, measure and enter. YET- here I sit, 9 days into being extremely consistent, and it looks like I haven’t’ even lost a fifth of a pound. Why? Here’s some reasons the scale fluctuates for me.

And to wrap it up, I LOVE this quote:

Our greatest weakness lies in giving up. The most certain way to succeed is always to try just one more time.

I WILL NOT GIVE UP!

For my meals, I ate

That’s it for today. Be back tomorrow!

READ NEXT –> DAY 10 There’s more to life than your next meal!