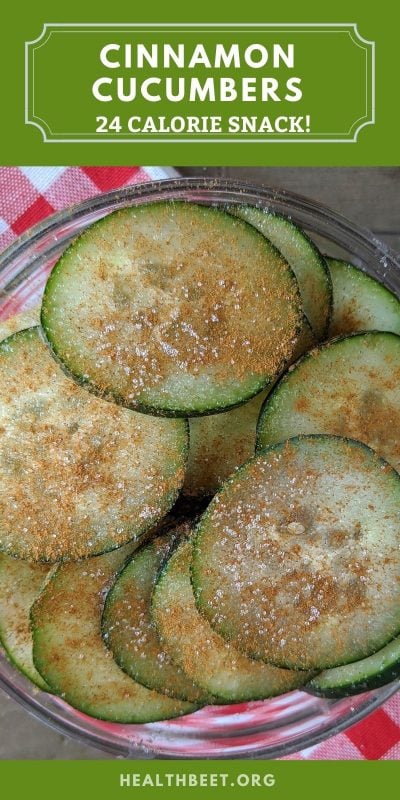 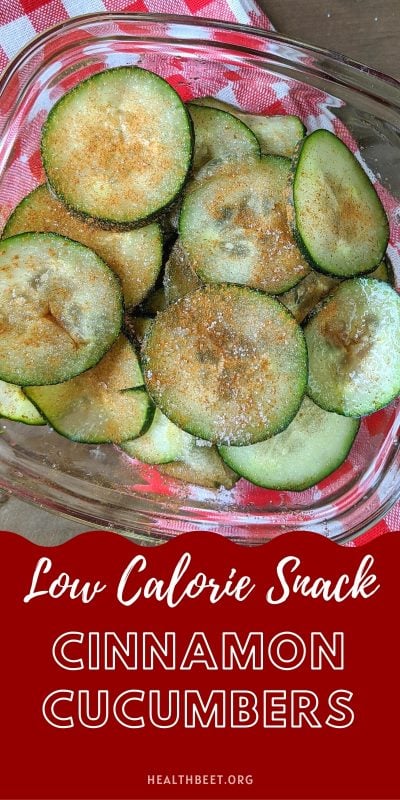 Cinnamon Cucumbers, while it sounds strange, is surprisingly delicious and under 25 calories per serving. With a cucumber, ground cinnamon, and zero calorie sugar, you can make this today.

I wasn’t going to share this idea for cinnamon cucumbers, because I figured it might be too strange, and so many people won’t give it a chance! But, I had to share it because:

If you really think about it, cucumbers really don’t have much of their own flavor. They adopt the flavors of the foods you are eating it with pretty well.

The cinnamon on cucumber snack is a go-to snack among some bikini competitors I know, and even in some other countries. So, instead of thinking it’s weird- who’s going to embrace it with me?

How many calories and carbs are in cucumbers

Cucumbers have a lot of water (96 grams out of 100) making them very low in calories and carbs.

Since we mostly eat medium or large cucumbers, a good rule of thumb I use is that a regular cucumber will average: 25 calories and 4 grams of carbs

Is cucumber a fruit?

I love this question! Especially because my big message at Health Beet is food groups! Eating a balance of all the food groups is vital to good health. But, I do that with a bit of flexibility. As with tomatoes, I go both ways.

My standard answer is: There are many ways to classify plants. A botanical classification of cucumbers would be grouped as a fruit.

A culinary classification of cucumbers, most people would put it in a vegetable category.

Here’s a terrific article that has more details about botanical vs culinary classifications of fruits and veggies. “Is a cucumber a fruit or vegetable and why”

It’s not as important as how you classify it, but just that you eat it!

Cucumbers are low in calories, and a terrific snack or meal filler for anyone trying to lose weight. But, they are also a great source of nutrients! In fact, they are:

Now that we’ve established you should be including cucumbers in your diet, now we can make the cinnamon cucumbers!

I usually peel the cucumbers first, just because sometimes the skin has too much bitter flavor in it.

So, I peel the cucumber and slice it or chop it. Then, I use a mixture of zero calorie sugar (like the Monk Sugar I buy at Costco), and cinnamon.

Once I’ve coated every slice of cucumber with my cinnamon sugar, I either eat it right away, or chill it! Either way, I can’t get enough. In fact, I’m usually licking my plate clean! 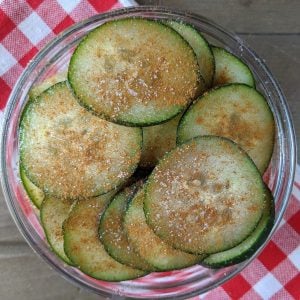