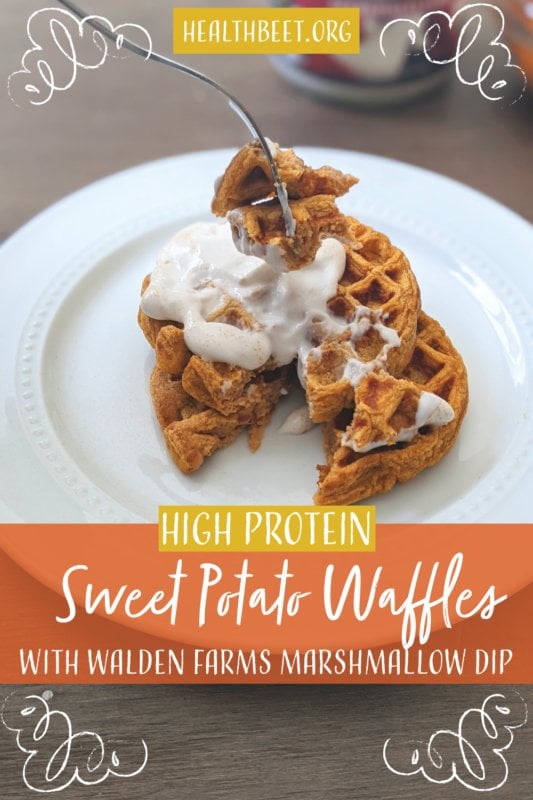 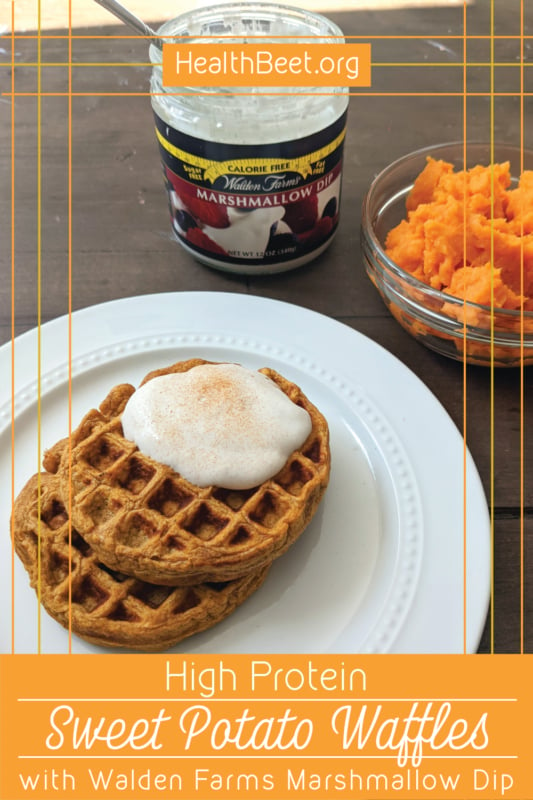 The calories and macros for the entire sweet potato waffle recipe is 208 calories, 13 g protein, 33 g carbs, and 2 g fat.

Sweet potatoes are a healthy food to include in your diet. Not only are they low in calories, and high in fiber, but they fit perfectly in a macro friendly diet or even a body building program.

Most bodybuilders or bikini competitors use whole food sources of carbs to fuel their workouts. Plus carbohydrates are essential to support muscle building.

While I’m a fan of low carb diets, I’m 100% in the camp that this doesn’t mean NO-CARBS! In fact, I share a low carb meal plan here, and the biggest complaint I get is that people are surprised to see rice and potatoes on the plan.

This is intentional! Carbs are essential.

So, with that out of the way, making sure you get your carbs from whole, high fiber foods is the best way to regulate blood sugar, build muscle, and feel great!

While this recipe for waffles is similar, I reduced the measurements of everthing slightly to save some calories, and so I could eat the entire batch.

For the waffles, knowing everything had equal amounts, I simply used 1/3 cup of each. 1/3 cup oats, 1/3 cup egg whites and 1/3 cup sweet potato.

And for what it’s worth, it’s also basically the same recipe as the low calorie pancakes, except the sweet potato is swapped for cottage cheese!

How many waffles does this make?

I made two waffles, using the Dash Mini Waffle Maker. I love making several small ones with the dash!

But, if you have a regular size waffle maker, it should make one large waffle.

How to make this recipe for yam waffles

First, if you have yams or sweet potatoes for dinner, ALWAYS save some of the baked flesh. There’s so many recipes you can repurpose it with.

I had baked some sweet potatoes for my meal prep the prior week. So, when I saw it in the fridge, I scooped out 1/3 cup.

Second, I used egg whites! I love using egg whites in baking. It improves the nutrients and protein, without raising calories much at all.

Then, I used oats! Also a carbohydrate powerhouse for dieting. Oatmeal brings fiber to regulate your blood sugar and keep you regular! Oats, at least in the US are also great because they are considered gluten free.

And then, the best part! The part that I’m so excited about. The zero calorie Walden Farms Marshmallow dip for the top.

I first bought this dip a few weeks ago, and it’s been sitting in my cupboard as I was trying to decide what to eat it with.

It wasn’t until I made the sweet potatoes that it occurred to me to put them on top! It started with me just putting the Walden Farms Marshmallow Dip on top of my mashed sweet potatoes. I LOVED IT SO MUCH!

So, then, I moved on to adding it to the waffles, and I have to say… MATCH MADE IN SWEET POTATO HEAVEN! 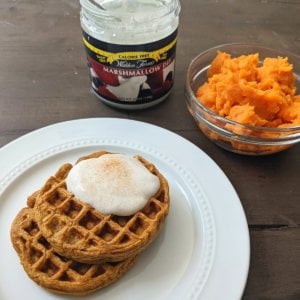