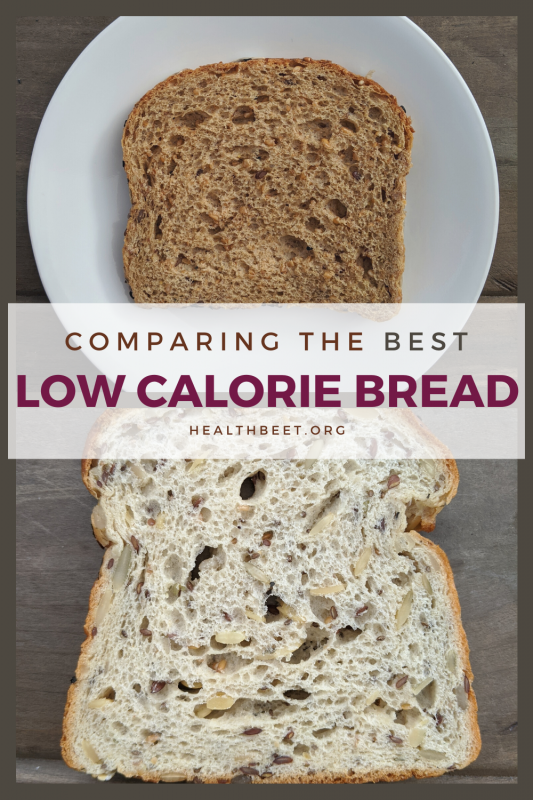 I spent all the money and all the carbs trying to find the tastiest low calorie bread on the market! Here’s my results.

I. Love. Bread. I love bread! I can hear Oprah saying this for her weight watchers commercials in my mind whenever I think about bread. I repeat it often to anyone listening. I get you Oprah! I LOVE BREAD too!

Bread has gotten such a bad reputation in the past two decades as something to eliminate if you want to lose weight. I can promise you, I’ve lost weight, and maintained it, without ever cutting bread out of my diet. I literally eat a slice of bread every day. (Except my 7 days on Bright Line Eating of course!)

Because I’m such a fan of bread, and I’m willing to say you can still lose weight without giving it up, I’ve made it my mission to find the YUMMIEST and BEST LOW CALORIE BREAD I could. This way, low calorie bread could always be a part of my diet!

Which bread is low in calories?

Most of the regular calorie bread on supermarket shelves have between 90-110 calories. The bread on the shelves you see that is super low in calories (below 50 calories) is usually so light weight, it can’t even take a spread of butter. It tastes like air!

But, there is something in between! The low calorie bread I’ve been eating is hearty enough to be filling and can take a spread of peanut butter like a champ! These are my top 4 favorite, hearty, filling, low calorie breads from my local supermarket.

My number one choice for low calorie bread is the Dave’s Killer Bread, Thin Sliced Powerseed (not sure why they are charging so much for that one, but another Dave’s Killer thin sliced bread through amazon is cheaper. I would just buy it at the store though. This one is super hearty, filling, and has great ingredients with only 60 calories. Plus, I get really excited about the 240 mg of Omega 3! This low calorie bread tastes great for sandwiches and toast.

My second choice is a new bread I recently found, Franz Organic Thin Sliced PROTEIN! For one slice, this one has 85 calories and 5 grams of protein. I like how chewy and nutty this bread is!

My third choice, is actually a bread I’ve been purchasing for at least 10 years. My kids grew up on this bread. I used to buy it because it was the only wheat bread that I thought was truly soft enough to be delicious. The bonus for me feeding my kids was that it also had 3 grams of fiber, and 4 grams of protein. Now I buy it because it is only 80 calories, and is the cheapest of the breads I like.

And finally, if my store doesnt’ have Harper’s Homeade and I don’t want to spend extra on special breads, this Dunford Bakers Wheat bread is a SOLID alternative. It’s a little “wheaty”, but it’s only 70 calories, which is awesome!

The last few are good options, even though I don’t love them as much as the first four.

The cheesecake Factory bread is yummy, but it’s so dark, I don’t know that my kids would eat it.

Oroweat organic thin-sliced is only 70 calories, but it’s kind of light weight and airy.

And finally, Franz bakery also has a Keto bread for 40 calories. I grabbed a photo of it, but I didn’t want to spend $5 to try it, mostly cause it’s marketed as Keto and I’m not a fan of foods labeled with Keto.

I have never tried this bread, as I don’t have an Aldi’s in Utah, but this bread is 35 calories!

Also, one I’ve never tried, because I haven’t seen it at the store. But, I’d love to find it! Aunt Millies 40 calorie bread.

READ NEXT — > Check out my pics for Low Calorie Tortillas here!